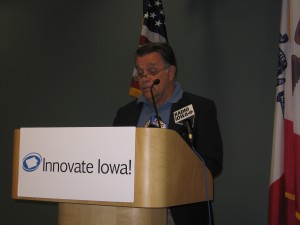 Bioscience leaders in Iowa are touting a new report which claims investment in medical research would jumpstart the U.S. economy. Walt Plosila is a senior advisor with Battelle, which prepared the report for the Council for American Medical Innovation. Plosila was in Des Moines Thursday and said the country’s leaders are stifling medical research.”The Research and Development Tax Credit, that companies need to invest, is now in it’s 13th temporary extension,” Plosila said at a news conference. “It’s kind of hard to strategize for investing for the future when it’s constant temporary extensions, usually after the last one expired.”

The study calls for the formation of public-private partnerships to focus on what Plosila calls the “valley of death” gap that exists between early-stage research and later-stage development projects. The report shows the U.S. is falling behind other nations in math, science and technical skills. Doug Getter, with the group Innovate Iowa, says it’s clear changes are needed to improve the Bioscience talent pool. “Sixty-three percent of the Iowa students taking the ACT college entrance exam failed to meet the benchmark score in science,” Getter said. “That’s 5 out of 8 students who have some chance of succeeding in college in the world of science.”

Getter says a medical innovation policy would improve the economy and health and productivity of American citizens. “We have the opportunity to make the right decisions…in terms of economic and human benefits provided through medical innovation. These can be permanent and far-reaching, but it’s our feeling the time is now to act,” Getter said.