You are here: Home / Politics / Govt / Republican challengers question Secretary of State, Treasurer’s use of ads 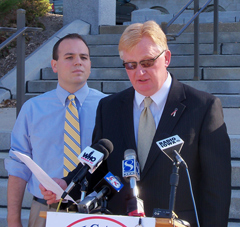 The Republican candidates for Secretary of State and State Treasurer are accusing the incumbent Democrats of using ads promoting state programs as personal campaign ads and are calling on them to stop.

They also say the legislature should pass a law preventing such practices. Republican David Jamison says Democrat State Treasurer Mike Fitzgerald is using the ads for promotion of his campaign.

“While the programs and the duties of office might be legitimate, the timing of the promotion is dubious, and any use of public funds in unethical,” Jamison says,”Mike Fitzgerald is using our money to fund his re-election campaign. He has hid his campaigning behind programs like Iowa College Savings program, and the Great Iowa Treasure Hunt and the Women and Money Conference, but it is the taxpayers who’re paying for it.”

Jamison says Fitzgerald should use campaign funds to promote his re-election bid. “It’s clear he is using his office as campaign headquarters, he has no official campaign website, he has no official campaign e-mail, no yard signs, no ads paid for with campaign funds, nothing that would indicate that he is running for office,” Jamison says, “What he does have is public resources, 15,000 dollars worth of ads recently for the Iowa College Savings program on one local station alone. The people of Iowa expect better and deserve better from the state treasurer.”

Deputy State Treasurer, Karen Austin, answered questions from Radio Iowa about Jamison’s claims. Austin says no taxpayer money is used in the advertising for College Savings Iowa or the Great Iowa Treasure hunt. Iowa is part of a group of states that promotes college savings during the month of September.

Austin says that’s why they run ads during the month of September and says it’s a great program. She says state law requires them to run the newspaper ads for the Great Iowa Treasure Hunt and they have done that since the beginning of the program. Republicans say the programs could be promoted without Fitzgerald being prominently displayed in all the College Savings Iowa ads. Austin says it’s important to let people know the program is backed by the state.

Austin says, “The way that we look at it, is having a state office that does this adds credibility to the program, and that is one thing that gives people comfort in understanding and knowing who is promoting this program, and why should I invest in this program and is that state tax benefit legitimate. So we have always felt that it is very important to make sure that people understand what this program is.”

Republican Matt Schultz was critical of a public service announcement featuring Democrat Secretary of State Michael Mauro that highlights the availability of voting machines for people with special needs. Schultz says,”Now this is being used by a grant funded through the Department of Health and Human Services. This is taxpayer money. It’s just wrong, this is the kind of stuff we would expect out of Chicago, not Iowa. We need change, we need someone who is going to stand up and not use these type of gimmicks. As far as I’m  concerned, this is an abuse of power, that if I’m elected Secretary of State, I will not do.”

The ad also features Jones County Auditor Janine Sulzner a republican, and the president of the Iowa Chapter of the National Federation of the Blind. Schultz says legislators should make a change prohibiting such ads. “If we are using funds by the state, you will not see my name in the ad. The Office of Secretary of State is an office, it’s not a person and it needs to be treated that way,” Schultz says, “so I also am calling on the legislature that prevents any statewide incumbent to use state dollars, taxpayer money, to promote themselves, especially during the last 30 days during an election.”

Schultz says he does not have a problem with the issue the p-s-a’s are presenting. “I think promoting the program is important, but it’s the way in which you do it,” Schultz says, “and doing it in these last 30 days right before the election with Michael Mauro being the main individual in the ad, just comes off as being a campaign ad.” Schultz says Mauro should pull the ads and reimburse the taxpayers with his campaign contributions for the ads.

Mauro defended the ad saying he gets criticized for not doing his job and then criticized when he does do it. Mauro says the ad is a bipartisan educational piece that includes the Republican leader of the county auditors association and the president of the Iowa Chapter of the National Federation of the Blind, so he believes it is well done. Mauro says it is his job to promote the voter machines, “So I can’t do my job on one side and not do it on another then be criticized for doing, so I have no issues about this at all.”

Mauro was asked about the timing of the ads. “When do you think I should do this? At Christmas time?,” Mauro asked reporters, “this is 40 days outside the election cycle, it’s and educational piece to get people to use equipment that hasn’t been used. It’s a bipartisan piece.”

Mauro says Republicans like him to educate people, but they don’t want people to know who he is. The machines featured in the public service announcements allow blind voters to have the ballot read to them. They can also magnify the ballot for people who have trouble seeing, and allow voters to use a touch screen if they have trouble holding a pencil.