You are here: Home / Crime / Courts / Virginia A.G. in Iowa to campaign for Republican Findley 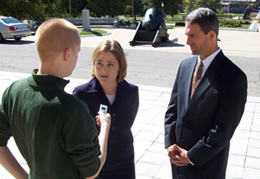 Virginia’s Ken Cuccinelli is among the state attorneys general who have filed lawsuits challenging the federal health care reform law. “It’d be nice to have another ally, which we don’t really have here in Iowa now, on health care, on EPA — on any of the things that the federal government is doing that are frankly so threatening to future opportunity and the economies of every state,” Cuccinelli says.

Brenna Findley — the Iowa Republican Party’s nominee for state attorney general — promises that if she’s elected, she’ll join the legal effort to get a court to nullify the health care reform law. “Iowans should not be forced to buy a certain kind of health insurance or face IRS penalty,” Findley says. “That’s wrong and it’s unconstituional.”

Cuccinelli was elected Virginia’s attorney general in November of 2009 and he talked with Findley last December, urging her to run for Iowa attorney general. “To have him here on the very day that they’re filing the briefs in their lawsuit to stop the federal government from taking over our health care system, it’s a special day in history,” Findley says.

Cuccinelli’s lawsuit is being pursued through Virginia’s court system and oral arguments in the case are to be held in a couple of weeks.  Another lawsuit, filed in Florida, is being pursued by 20 other states. Iowa Attorney General Tom Miller, a Democrat, said this spring that he took a “good look” at the health care reform law, and decided the attorneys general who are challenging it have “no case”.

Cuccinelli spoke at an event in Des Moines earlier today. He and Findley will appear at an event in Cedar Rapids at 5:30 and in Dubuque at 7:30 this evening.

Another out-of-state politician will be in Iowa tonight to help an Iowa Republican. New Jersey Governor Chris Christie will headline a fundraiser in Des Moines for Terry Branstad’s campaign for governor.