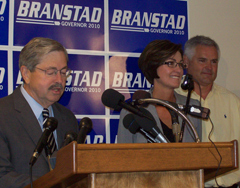 It appears the two major party candidates for lieutenant governor will not debate this year.

Reynolds says her schedule it just too packed. “Right now, what I’m focused on is getting to all 99 counties. I made that commitment when I signed on as lieutenant governor nominee,” Reynolds says. “We’re at 84, so it’s a very aggressive agenda, and we are determined to make that mark by, before the election.” 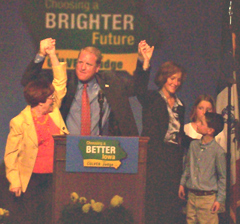 Governor Culver with Lt. Governor Patty Judge, his wife Mari and his children.

Culver says the public deserves to see the two women, side-by-side, in a debate. “Iowans deserve to hear directly from someone that could be one heartbeat away from becoming the govenror of this state,” Culver says. “And it’s irresponsible for her not to step up on a stage with my outstanding and capable lieutenant governor, Patty Judge, who has proven to all Iowans that she is prepared to lead right now, no matter what.”

Branstad says Reynolds “would do great” in a side-by-side comparison with Judge. “But frankly at this point in time, we’re very late in the campaign and the schedules are pretty well set, so we don’t want to pull the lieutenant governor off of the great job she’s doing meeting with people and rallying the troops and visiting every county and talking about jobs. That’s what the focus here is going to be,” Branstad says. “Maybe the opposition wants to talk about other things or spent their time attacking us.”

According to the Branstad campaign schedule, Reynolds will make five public appearances over the next five days.  Culver suggests Reynolds shys away from the public eye. “She must have a problem with trying to explain Terry Branstad’s broken promises,” Culver says.

Reynolds has this rebuttal.  “While they’re focused on a debate, we’re focused on being out in the public and meeting with Iowans and actually taking their questions and listening to them,” Reynolds says.

Culver and Branstad are scheduled to debate this Thursday night in Cedar Rapids and again on October 21st in central Iowa.

Listen to Reynolds and Branstad talks about a lieutenant governor debate: LGGOP

Listen to Culver talk about a lieutenant govenror debate: LGDEM