You are here: Home / Sports / Voelker returns to the ISU wrestling program 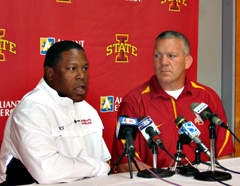 A two-time NCAA champion for the Iowa State wrestling team in the 1980s is rejoining the Cyclones as an assistant coach.

Eric Voelker was a teammate of current head coach Kevin Jackson on the 1987 I.S.U. team that won the NCAA championship. Voelker will be inducted into the I.S.U. Letterwinners Hall of Fame next weekend.

“It’s great to be a piece of (the I.S.U. Hall of Fame) and I’m thankful for it,” Voelker said. “Now, in the other capacity, it’s a chance to not just have my name on the wall, but play the active role in helping some these student athletes accomplish the same…it’s just phenomenal.” Voelker, the 190-pound NCAA champ in 1987 and ’89, said he hopes to help I.S.U. knock the Iowa Hawkeyes off the top of the college wrestling world. The man who hired him, Kevin Jackson, says that’s his goal too.

“I think his mentality is the same as mine because…one of the first comments he makes is how important it is to compete against the other team across the state. That’s a priority for us as a staff and that’s a goal we’re trying to attain,” Jackson said. Since graduating from Iowa State in 1989, Voelker spent time as a prep wrestling coach at his alma mater, Dallas Center-Grimes.