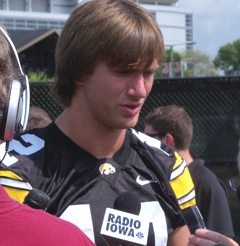 Ricky Stanzi talks with the media.

Iowa offensive coordinator Ken O’ Keefe says quarterback Ricky Stanzi is having success on the field because of his hard work off of it.

Stanzi is completing nearly 68% of his passes for the 15th ranked Hawkeyes who are off to a 4-1 start. He has ten touchdown passes and only two interceptions.

O’Keefe says Stanzi is at a point now where he can see when a scout team player is lining up wrong and knows how to move them into the position where they need to be.

Iowa is off this week and returns to action next week at Michigan.