You are here: Home / Crime / Courts / Culver to attend fundraiser for group that backs gay marriage 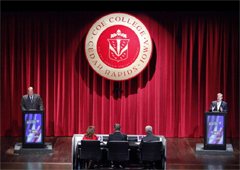 The two candidates for governor debated Thursday in Cedar Rapids.

Governor Culver and the top two Democrats in the Iowa legislature are scheduled to attend a fundraiser tonight for the Fairness Fund, a political action committee that backs candidates who support gay rights.

Gay marriage was a subject in last night’s debate between Culver and Republican rival Terry Branstad.  The candidates were asked what kind of impact same-sex marriage has had on the state and Culver answered first. “It has not had an effect on the state of Iowa, other than allowing people to make their own decisions,” Culver said.

Branstad pointed to statements Culver made in the 2006 campaign. “Governor Culver has switched his position from supporting one-man/one-woman marriage since the court decision,” Branstad said.

Branstad said Iowans should have a chance to vote on an amendment to the state constitution which would ban gay marriage, and he was interrupted by someone in the audience who asked when she could vote on Branstad’s marriage.

“The people of Iowa are the ones that should have the final say on this,” Branstad began, before the woman in the crowd yelled her question.  “They should be given the same opportunity as 31 other states and every state from Maine to California where it’s been on the ballot, the people have voted for it.  Iowans deserve that same opportunity and that’s why I think we need to change the leadership of the legislature that’s not given the legislature an opportunity to vote on this and the people a chance to vote on it.”

Branstad backers in last night’s crowd applauded his response, just as Culver’s supporters in the room applauded when Culver declared his opposition to such a constitutional amendment. “We need to move on.  We need to move forward.  We do not need to add discrimination to our constitution, something that would only take us backwards on civil rights,” Culver said. “We want to go forwards in this state in terms of civil rights.”

A proposed constitutional amendment must be endorsed by two separate Iowa General Assemblies — the state legislature — before it is placed on a statewide ballot.   The Iowa Catholic Conference is urging Iowans to vote this fall for a constitutional convention in hopes of bypassing legislative delays and getting an amendment before the voters that would forbid gays and lesbians from marrying in Iowa.