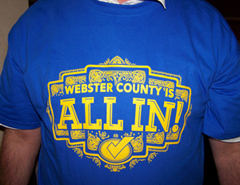 Charges have been filed against four men connected to a proposed casino in Fort Dodge who made $25,000 of campaign contributions to Governor Culver last year. The donations were made shortly before state regulators considered the Fort Dodge casino application.

Two executives from Peninsula Gaming are among those charged with misdemeanors that carry a fine of over $1,200 and the two could be sentenced to up to a year in jail if convicted.

“Peninsula Gaming adheres to the highest standards of regulatory compliance, business practice and ethical conduct,” says Guy Cook, an attorney for Peninsula Gaming. “They do things by the book and they deny these charges and they look forward to a positive resolution.”

The company, which operates casinos in Dubuque and in Northwood, also faces a misdemeanor charge in connection with the case.

The investigation was handled by a special prosecutor after the state’s attorney general took himself off the case to avoid a conflict of interest since Culver’s campaign manager had worked for the attorney general.

The head of Webster County Entertainment, the group that applied for a casino license for Fort Dodge, was also charged with a misdemeanor.  A Davenport lawyer is the fourth man to be charged and he’s accused of altering evidence in the case as well.

Neither Culver nor any of his campaign aides were charged.  Culver’s campaign issued a written statement this afternoon, saying the governor is “pleased, but not surprised” the findings from the special prosecutor did not result in charges against Culver or his staff.

In the spring of 2009 Culver urged the Iowa Racing and Gaming Commission to grant licenses to all four communities that were seeking casinos, but regulators granted only one, to Lyon County in northwest Iowa.

Tim Albrecht, Branstad’s communications director, issued a statement late this afternoon.  “It is sad and unfortunate that Gov. Culver has allowed a culture of corruption to permeate the political landscape in Iowa,” Albrecht said. “…While the special prosecutor has so far not charged the Culver campaign with wrongdoing, Iowans can draw their own conclusions about the circumstances surrounding this “pay for play scandal” and whether or not this passes the smell test.”

The special prosecutor issued a statement this afternoon suggesting the investigation phase is over.  “The evidence did not disclose a basis for any criminal charges to be brought against any other person,” Des Moines attorney Lawrence Scalise, the special prosecutor, said in a written statement.

Culver, in his written statement, said the matter had been “resolved.”

“Because we knew we had acted appropriately, we have not been worried about this process, but rather, we have been focused on the November election,” Culver said. “We will continue to work tirelessly until election day to highlight the important choices at stake in this election for our working families, our children and our seniors.”