The Aviva insurance and annuities company cut the ribbon on its new 360,000 square foot U.S. headquarters today in West Des Moines. Aiva’s global C.E.O. Andrew Moss spoke to employees and guests and said the British company has made a major investment in central Iowa.

He says the campus represents the growth of their brand in the U.S. and he believes it will allow them to serve even more customers in the U.S.A. Around 1,300 employees will work at the building that has many features that make it “green,” including the way it uses light and rain runoff. Aviva U.S.A. president Chris Littlefield says the building brings employees from several locations under one roof. 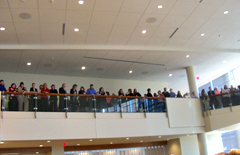 Aviva employees watch from a balcony.

Littlefield says they believe they have built the most vibrant, efficient, collaborative and environmentally friendly workplace that will allow employees to serve consumers. The company is seeking a “gold level” certification for the $150-million building from the Green Building Council.