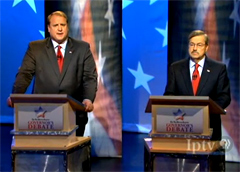 The two major party candidates for governor met in their third and final televised debate early this afternoon.

“This is something that Terry Branstad and I agree on,” Culver said.

Branstad quickly followed: “I have been a real strong supporter of clean air.”

Both candidates were asked whether they’d vote for a constitutional amendment that eventually may set aside money for land and water conservation projects. Culver said yes. Branstad said he wouldn’t reveal his voting decision on that ballot issue. The next question was about another ballot issue, the retention election involving the three Iowa Supreme Court justices who are targeting by “vote no” a campaign.

“I think people should vote their own convictions on these issues,” Branstad said. “I’m not going to try to influence the way people vote on ballot issues.”

Culver answered: “Governors need to lead.  I will vote yes on retaining the justices.”

The candidates repeated their critiques of the other’s record as governor. Branstad is seeking a fifth term; Culver a second.

Toward the end of the debate, both were asked by Dean Borg of Iowa Public Radio and Television what bugs them about the way they’re portrayed or caricatured.  Culver began by bragging about his family. “And I am like most Iowans. I’m hardworking. I’m honest and I’m committed to doing everything I can to make a difference.”

Borg interjected: “So, you like everything about yourself, then?”

Culver responded: “No, I can’t control a lot of that, Dean, but what I can do is get the job done which is exactly what I’ve done for the last four years.”

Borg redirected the same question to Branstad: “What caricature really gets under your skin?”

Branstad referred to a Des Moines cartoonist’s work: “Duffy always makes me look really, really short and, you know, I have a mustache, but now I’m nominated for a national award.”  Branstad has been nominated for the American Mustache Institute’s Robert Goulet Memorial “Mustached American of the Year” Award.

Today’s debate was sponsored by The Des Moines Register. You can watch it this evening at eight o’clock on Iowa Public Television or see it online on IPTV’s website.