Democrat Governor Chet Culver kicked off the final full week of campaigning today at a downtown Des Moines restaurant and accused his Republican opponent Terry Branstad of taking it easy on the campaign trail. Culver says Branstad took the entire weekend off from campaigning.

“I think he’s running and hiding from these positions, and they just don’t add up. He has flipped and flopped, they’ve changed their position on the 15% budget cut five or six time in the last six, eight days. I think that’s why they’re going dark. Because they are in a really bad place, we’re gaining momentum, the polls are tightening,” Culver says. While Culver says the polls are tightening, he would not give specifics the poll numbers, other than to say his campaign is closing.

Culver and his Lieutenant Governor Patty Judge plan to visit several cities in the final days of the campaign. Culver was critical of Branstad for bringing in Republican notables like Mitt Romney and Haley Barbour to campaign for him. “Look..I couldn’t feel better about wining this race, Patty Judge and I are taking it to the streets, we’re going to Main Street, Patty has been working tirelessly, the First Lady has been going to dozens and dozens of cities,” Culver said.

Culver was asked about bringing in his own outside help from President Obama. He said he believes Obama will campaign for him in the last few days of the election. Culver got so animated at one point that he stumbled on his own stand on the judicial retention vote. 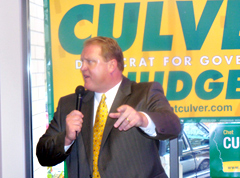 “He doesn’t even have the guts to stand up and tell us how he is gonna vote, on an issue that he’s been saying the people need to vote. Well tell us, you’re supposed to be a leader, how are you gonna vote?, Culver said, “I’m voting no, I’m voting yes on retaining those judges. He wants to tell you he’s gonna vote no, but apparently doesn’t have the courage.”

“Well this is what desperate campaigns do, they go on the attack rather than talk about what they’ll do for the State of Iowa,” Albrecht says, “rather than worrying about our schedule, which includes 36 events over the next seven days, we wish Chet Culver would focus on recovering the 55,000 jobs lost since he became governor. He can’t make up for four years of failed policies in a couple of days of stage campaign events.”

Albrecht says Branstad is offering tax cuts to keep Main Street alive and Culver must think that’s bad for Iowa. “Chet Culver acts like he’s waking up to the problems on Main Street, that’s because he’s been asleep for the past four years. His actions as governor have been overtly hostile to Iowa’s Main Street businesses,” Albrecht says. Albrecht says the polls Culver quotes don’t show good things.

“His campaign paid for a poll to cook up numbers right before the fundraising deadline, and he was still only at 39-percent,” Albrect says, “so if being at 39-percent in a poll you paid for is momentum, I think that Iowans would have to disagree with him on that.” Branstad will campaign with Mitt Romney in eastern Iowa on Tuesday. Governor Culver plans stops in Washington, Fairfield, and Knoxville Tuesday.