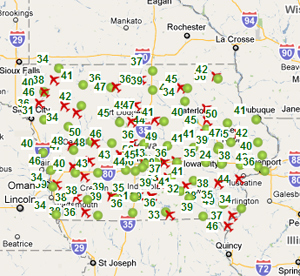 High winds have caused a multitude of problems today across the state. Iowa Department of Transportation spokesperson, Dena Gray-Fisher, talks about some of the reports she’s seen.

She says there have been quite a few vehicles blown over by the wind, there are power lines down and tree limbs down on the roadways, along with some of the political signs being blown around.

“Those are the type of vehicles that have been overturning today, and it is very difficult to maintain control of them with these wind gusts,” she says.

Gray-Fisher says other drivers need to stay alert for shifts in traffic caused by the winds. Gray-Fisher says if you are on a multi-lane highway, give everyone some extra space, as it is easy for a truck or S.U.V. to be pushed into another lane. You can check out the wind and other conditions before heading out.

Gray-Fisher says you can go to: weatherview.iowadot.gov to see all the weather data collected by the D.O.T. out on the roadways. The entire state is experiencing sustained winds of 20 to 30 miles an hour with wind gusts of 45 to more than 50 miles and hour some areas.

Some of the semis rollovers reported to the D.O.T. included one that blocked the right lane of I-35 southbound near Dows in Franklin County; one that closed the right lane of I-35 northbound at mile post 124 north of Ames; and one that blocked U.S. 18 near Clear Lake. Iowa Highway five on the north edge of Carlisle was closed briefly due to a downed power line over the roadway.