Radio Iowa’s Campaign Countdown series has focused on the congressional and statewide races on this fall’s ballot. In the Secretary of State’s race, a western Iowa Republican is challenging the Democrat who’s held the office for the past four years.   O. Kay Henderson reports: Secretary of State 2:41 MP3 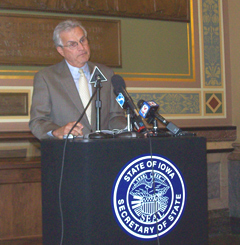 Iowa’s Secretary of State serves as the commissioner of elections and voting-related issues have dominated the race. Democrat Michael Mauro is the current Secretary of State. Mauro is a Des Moines native who graduated from Drake University and taught high school government after college.

In 1983, Mauro went to work in the Polk County Auditor’s Office and he served as the elected county auditor for his last nine years there. In 2006, Mauro was elected Secretary of State and he’s seeking a second term this fall.

“I’ve been administering elections in Iowa for over 25 years and during that time I’ve had a simple, basic philosophy and that’s to make the process as easy as possible, while at the same time make sure it is safe, secure and fair,” Mauro said recently on Iowa Public Television.

Mauro says election officials or poll watchers already can ask voters to show a photo I.D. if they believe the voter isn’t who they say they are. And Mauro says there’s no way to check the photo I.D.’s of thousands of Iowa voters who’ve mailed in absentee ballots this year. 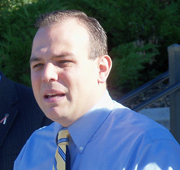 “So it sounds good and it’s a good issue to run on. It’s a good 10-second cliché or sound bite, but it’s much more complicated than what (Schultz) makes it sound like,” Mauro said during an interview with Radio Iowa. Iowa has a “same-day” voter registration law which allows Iowans to register to vote at their precinct on Election Day.

Schultz has called for putting aside the ballots cast by voters who opt for Election Day registration, and counting them one-by-one as provisional ballots, double-checking whether the person’s eligible to vote. “If you’re a felon and don’t have your voting rights restored, you could register on Election Day and someone may not be able to catch that,” Schultz said. “…Otherwise, (the ballot) goes in with everyone else’s and you can’t unring that bell.”

Mauro touts a new electronic system that will be operating in half of Iowa’s 99 counties, letting poll workers cross-check whether a potential voter is a felon. “And when that guy that Matt says is going to show up and try to commit another felony, it’s going to flag them right there,” Mauro says. In this closing week of the campaign, the Iowa Democratic Party sent out a press release criticizing Schultz for not voting in six local elections and for not voting in Republican Primary Elections in 2000, 2002 and 2008.

Schultz says he missed a few elections while he was in college and busy raising his family, but he has never missed voting in a General Election. “I think it’s just a distraction from the real issue and that is whether or not you should show a photo ID when you vote,” Schultz said during a telephone interview with Radio Iowa. “And this is just a desperate attempt to try and change the subject.”

So what’s Mauro’s record of voting in elections? “I have a perfect voting record,” Mauro said this week. “Can’t ever remember missing an election.” The secretary of state’s office also receives and stores a variety of key business records, like articles of incorporation. Schultz has said he wants to lobby legislators for more “business-friendly” laws.