You are here: Home / Politics / Govt / Democrats rally in Ames

Governor Chet Culver is out on the campaign trail making the case that every vote counts, and he’s citing another race for governor in another state as evidence.  Culver, a Democrat, faces Republican Terry Branstad on this fall’s ballot.

“We had a race in Washington state in 2004 that was decided by 42 votes,” Culver says. “This race is going to be close.  We’re going to win this race, but we cannot leave any of those ballots out there.”

The ballots in that 2004 gubernatorial race in Washington state were recounted twice, and the final margin of victory was 129 votes.

Roxanne Conlin is the Democrat who’s challenging Republican Senator Chuck Grassley’s bid for a sixth term. She says Grassley has just targeted her with a “nasty” video on his campaign website. The Grassley video replays comments Conlin made in April and uses ominous music and thunder sound effects to criticize Conlin’s stand on taxes.

“This is an election that we know we can win,” Conlin says. “We know the votes are there. We know that in fact we have enough votes in the state of Iowa to win from the top to the bottom, but we have to get them out to vote.”

Conlin and Culver made their comments early this morning during a get-out-the-vote rally in Ames. Iowa Democratic Party chairwoman Sue Dvorsky made a pitch to the grassroots organizers in her party. 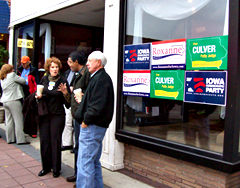 Supporters outside a Democrat voter rally in Ames.

“We’re going to break the all-time record for absentee ballots, for early votes,” Culver said, and the crowd in Ames applauded.

Figures released Wednesday by the Secretary of State’s office indicate over a quarter of a million Iowans have already sent back an absentee ballot or they’ve voted early at their county auditor’s office or at satellite voting stations in their area. That outpaces early voting in the mid-term elections of 2002 and 2006.