You are here: Home / Education / ISU flood costs running below estimates, U-I could go above

Floodwaters on the I.S.U. campus.

An Iowa State University representative told the Board of Regents Thursday that flood recovery efforts are moving right along and some of the repair is costing less than expected.

I.S.U. vice President Warren Madden gave the board a report on the efforts to recover from the June flooding.

Madden says they are either on or ahead of the schedules they had established, and though the overall cost estimates are still in the 40 to $50-million range, the costs estimates seem to be coming in on the low side of the estimates.  “So we are feeling generally very good about where we are,” Madden said.

Hilton Coliseum is the building that has had most of the spotlight, and Madden says it is on schedule to host the first women’s basketball game on November 4th. He says they are testing things out and the building should be “functionally operational” this week, and he says the Scheman Building is also getting ready to re-open and he says that will put them “back in the meeting business.” The building includes several large conference rooms that are used for conventions and meetings.

Part of the recovery is looking at ways to prevent the flooding from happening again. Madden says it doesn’t appear as though any major building moves are going to be a part of the plan. Madden says while they are working with the city and county about overall flood mitigation, the discussions they’ve been having with FEMA and insurance companies indicate that most of the buildings that have been damaged can be made flood proof by reinforcing the structures.

“The are not indicating that wee need to consider relocation or that we can’t make these buildings basically water proof,” Madden says. Madden says the flood plain the buildings are in is such that the water comes up quickly and only stays up for six to eight hours. He says that is much different than the type of flood the University of Iowa had in 2008. 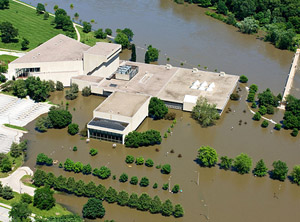 The U-I also gave an update on its flood rebuilding efforts. Vice president Doug True says they have made a lot of progress. He told the Regents that the U-I has already spent $155-million and recently completed the business interruption settlement with their insurance company for $5.5-million.

True says they have yet to settle the insurance claim for non-interruption, and that will “be a much larger number.” True says it looks like the cost for work on the Memorial Union is going to be right about where they pegged it.

True says they had a total of $42-million for mitigation and recovery, and right now it’s about $41-million. True says the early estimate for the total cost of recovery was $743-million, but he’s now speculating that final costs will exceed that as Hancher Auditorium and the Music Building are rebuilt.

True also told the Regents that the U-I is consulting with historians to ensure proper documentation before tearing down the flood-damaged Hancher and Music Buildings.

File photos provided by Iowa State and the University of Iowa.