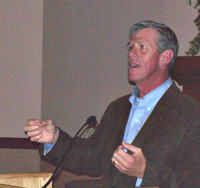 The Principal Financial Group continues to downplay the role the federal healthcare legislation played in their decision pull out of the medical insurance business. Republican third district congressional candidate, Brad Zaun, insisted in a televised debate that Principal’s exit from the industry was the result of the federal healthcare bill.

The bill was supported by Leonard Boswell, the incumbent Democrat Zaun is seeking to unseat. Zaun repeated his stance following a recent campaign event in Newton. Zaun said, “I’ve talked to numerous employees that said the true reason why they’re getting out of the health insurance business is because of the Obamacare, and I believe that’s the reason why they did and six other companies in the state of Iowa is getting out of the health insurance industry.”

Zaun cites a “Wall Street Journal” article that quoted a senior executive with Principal about the consolidation in the health insurance industry. But company spokesperson, Susan Houser, says the quotes were taken out of context and that officials met with Zaun privately to clarify.

“Unfortunately our action is being politicized during these midterm elections but the reality was a strategic decision and it was the right decision for The Principal and our many stakeholders,” according to Houser. Houser says their health insurance division had been declining over the past number of years and now represents less than three percent of their business.

Houser says company officials explained that to Zaun during a private meeting. “We certainly weighed a number of factors including the regulatory environment and reform,” Houser says, “but ultimately the Principal strategy and our ability to invest in our growing businesses was the real driver behind the decision.”

But Zaun, a state senator from Urbandale, says he’s spoken with numerous Principal employees who privately say the federal overhaul had more to do with the decision that the company is admitting. “I don’t know if politics are involved here. I do recognize that one of Boswell’s biggest contributors is the C.E.O. of Principal Financial,” Zaun says, “I don’t know what’s going on. Obviously if they could make profit I think they would still be in the business.”

A website that tracks political contributions confirms Principal is one of the top five contributors to Leonard Boswell’s re-election campaign. However the State’s Insurance Commissioner Susan Voss says the company has long considered leaving the health insurance business and has told her it was not the result of federal healthcare changes.