You are here: Home / Politics / Govt / Turn-out the focus as campaign 2010 winds down 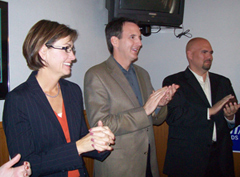 The closing weekend of the 2010 campaign featured two competing tours — one with top Iowa Republican candidates, the other with key Iowa Democrats. The common focus of both was voter turn-out.

At 10:30 this morning, about 150 Democrats from the Mason City area rallied at the Rose Bowl. Roxanne Conlin, the Democratic Party’s nominee for the U.S. Senate, joked about the hour.

“I’m sure God will forgive you for not going to church. We were a little worried about that, of course, because we want you all to pray,” Conlin said, laughing along with the crowd.

“We’ve traveled across the state. We’ve talked. We’ve pleaded. We’ve given the arguments,” Judge said. “Now you’ve got to do it. You’ve go out and help us get those votes in.”

“In the primary in June, (The Register’s polling) missed that thing by 20 points. They’re going to miss it by 20 points,” Culver said of the General Election. “…(The Register) said that Terry Branstad was going to beat Bob Vander Plaats by 29 points. He barely won the race. He won by nine points, so I’m here today to tell you we are fired up.  We are ready to win this election on Tuesday. We have 200,000 absentee ballots already in the bank.”

According to Culver, a “large segment” of Iowa voters are undecided or could change their mind on his race with Branstad. 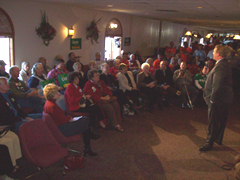 Govenror Culver talks to supporters at a rally.

“All those pollsters in Washington or wherever they are — they’ve decided, you know, who’s going to win and lose all across the country,” Culver said in Mason City, before asking the crowd a question: “Doesn’t that kind of make you mad, by the way?”

Many in the crowd responded: “Yes.”

“We’ve got good Democrats who don’t think that it matters whether they vote or not,” Conlin told the crowd in Mason City. “You have to convince them that it does matter, that it does matter who is in the United States Senate, who is your congressperson, who is your governor, you lieutentant governor, your attorney general and so on, because we know we’ve got enough votes, but you’ve got to get them to the polls.”

Sue Dvorsky, the chair of the Iowa Democratic Party, says that since June, the party and labor organizations have made two million voter contacts in Iowa.  During remarks this morning in Mason City, she threw that as a challenge to Iowa Republican Party chairman Matt Strawn.

“Only three million people even live here — two million voter contacts!” Dvorsky said. “This weekend we are on track to knock 400,000 doors. We are going to make more than 800,000 phone calls, so I say this to my friend and counterpart Matt Strawn: ‘We’ve upped our numbers, you up yours.’ We are ready to go and bring this thing home!”

Strawn was traveling the state this weekend with the statewide candidates on the G.O.P. ticket.  During a speech in Winterset on Sunday afternoon, Strawn didn’t mention comparable turn-out statistics. He focused instead on driving home a campaign theme.

“We’re going to send the entire nation a message on November 2nd, that change starts in Iowa with conservative, principled government,” Strawn said.

Branstad made this closing plea to the crowd of about 100 who gathered in the Godfather’s Pizza restaurant in Winterset. “We all want to humbly ask for your support and your help to win this election so we can get the state of Iowa back on the right track. Make the calls. See the people. Get us out a great vote on Tuesday. I think it can be a great election victory for all of us,” Branstad said to conclude his speech.

After the event, Branstad told reporters he’s encouraged by his double-digit lead in the “Iowa Poll”.

“We’ve won every poll that’s been out there, but the only one that really counts is the one they’re going to take on Tuesday,” Branstad said. “That’s why we’re working so hard, right up to the end, to generate the turn-out that we need. I’m very excited about it.  I’ve been through 11 contested elections. My record is 11-0. I’m really working hard to make that 12-0.”

Branstad campaigned in Osceola, Winterset and Boone today.”It’s all down to turn-out at this point in time,” Branstad said in Winterset. “We need every one of you to talk to your friends, neighbors, relatives, co-workers — and make sure they get out to vote. There’s a lot at stake in this election.”

Minnesota Governor Tim Pawlenty was in Iowa today to campaign with Branstad and help spur voter turn-out for fellow Republicans. “We’ve got to make sure that we finish strong and finish all the way across the line,” Pawlenty told the crowd in Winterset.

Kim Reynolds, Branstad’s running mate, echoed those words a few minutes later. “We are on the home stretch and I’ll tell you what, we are going to sprint across the finish line,” Reynolds said.

Pawlenty, who has indicated he is considering a bid for president in 2012, also headlined an event for Republican state senate candidate Kent Sorenson late today.

Senator Chuck Grassley had been on the campaign trail Friday and Saturday with the other Republican candidates, but he was not along for the events today.

Culver campaigned in Fort Dodge, Carroll, Sioux City, Atlantic and Council Bluffs as well as Mason City today. He and Conlin will be taking a train tour through the eastern half of Iowa Monday, with nine different stops.  Branstad and his running mate will go on a fly-around to seven different cities Monday.