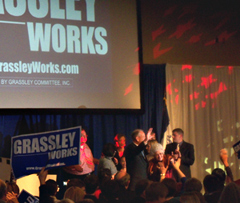 Iowa Senator Chuck Grassley, a Republican from New Hartford, was elected to a sixth term tonight, defeating Democrat challenger Roxanne Conlin. Grassley addressed supporters earlier this evening. “Our Republic is alive and well,” Grassley said, to cheers. “This is a great night, isn’t it? It’s a great night for America. It’s also a great night to send a message to Washington.”

Grassley criticized President Obama. “We had a president that was elected on a platform of change. They thought he was going to change Washington, but Washington is very much the same. He wanted to change America. The country has rebelled against that in this election,” Grassley said to cheers from the crowd of Republicans.

Democrat Roxanne Conlin thanked her family, campaign staff and other supporters after coming up short in her bid to defeat Grassley. “I’m proud of the campaign we ran,” Conlin said. “We stood strong for our principles.” 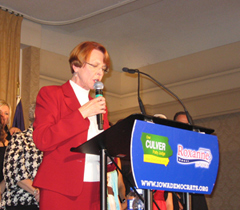 This is the second time Conlin has lost a general election for a statewide office. She ran for governor in 1982 and lost to Terry Branstad. “I must admit that being first runner-up again is not very satisfying,” Conlin said. “But there are other reasons to run besides winning. I got to talk about issues that might not have got a hearing and I met lots of women and girls who were happy to see a woman running for a high office.”

Conlin, a former federal prosecutor and current trial lawyer, said she was especially touched by all the unemployed Iowans she met on the campaign trail. “Their stories are why I developed a detailed plan to put Iowans back to work,” Conlin said. “I hope others will take that plan to Washington and implement as much of it as is possible.”