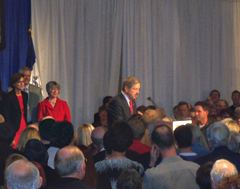 Republican Terry Branstad gives his victory speech as his wife and Lieutenant Governor nominee look on.

Republican Terry Branstad is returning to his old job as governor after 12 years out of office.

The 63-year-old Branstad defeated incumbent Democrat Chet Culver Tuesday and then spoke to supporters, saying he was more excited about the job ahead than he was the very first time he was elected.

“Tonight, I feel like the luckiest guy on the face of the earth,” Branstad said, adding he learned growing up that “the harder you work, the luckier you get.”

“Our work is not done. It has just begun,” Branstad said. “I need your help and the help of all Iowans of goodwill to complete this journey to remake our state. The task is great. The goals are ambitious, but we Iowans are a tough lot. We have endured much and we are stronger for it. We are ready to create a state were good jobs abound, families thrive, and government lives within its means.”

Branstad met with reporters after his speech and said he would get to work on the transition Wednesday. “We’re going to hit the ground running, and now the real work begins,” Branstad said. Branstad added that he is excited to get to work with a legislature that is now split, with Republicans controlling the Iowa House and the Senate likely in Democratic control. 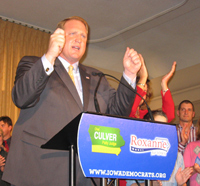 Democrat Chet Culver will be leaving the governor’s office after serving just one term. He addressed a gathering of Iowa Democrats at a hotel in downtown Des Moines. “I just want to let everyone know that I have called former Governor Branstad and congratulated him formally,” Culver said to open his concession speech.

“I wish the Branstad family and the entire team good luck in the future and I want to congratulate them on their victory tonight.”

Culver served two terms as Iowa’s Secretary of State before becoming governor in 2006. “It has been a great privilege and honor to serve the people of Iowa as the governor of this state,” Culver said. Following his speech, Culver met briefly with reporters.

“The people have spoken. I really respect the voters. I thank them for giving me the chance to serve as governor. We fought the good fight and I feel really good about that,” Culver said.