You are here: Home / Crime / Courts / Culver on his future, including decision on justices 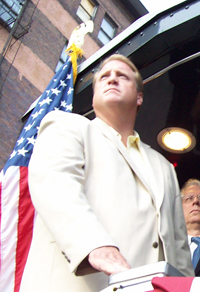 Governor Chet Culver says he’s looking forward to “some exciting possibilities” as he prepares to leave office in mid-January, but Culver’s also considering the opportunity he may have in his final days as governor to appoint new justices to Iowa’s Supreme Court.

Voters on Tuesday kicked three justices off the court and, if a Judicial Nominating Commission submits names to Culver before he leaves office, Culver’s not ruling out choosing three new justices for the court.

“We’ll see,” Culver says. “And if Terry Branstad and I don’t agree, it won’t be the first time.”

Governor-elect Terry Branstad told reporters late Tuesday that it would be “inappropriate” for Culver to “rush through” appointments to the court before Culver’s term expires in just over two months. During an interview Wednesday afternoon with Radio Iowa, Culver described his uphill battle for reelection as “tough,” but he expressed no regrets.

“You know, the voters decided to go in a different direction and I’m O.K. with that,” Culver said.

Culver, who is 44 years old, plans to take his wife and kids on a family vacation yet this month.

“I’m also anxiously awaiting some exciting possibilites that are out there.  We’re looking forward to some serious family time, first and foremost,” Culver said during his interview with Radio Iowa. “Things have a way of working out.”

Culver taught school and coached at a Des Moines high school before his 1998 election as Iowa’s secretary of state. Culver said he wants his next role in life to be one that “makes a difference and contributes” to the state in the future.