Council Bluffs City Councilman Matt Schultz defeated Secretary of State Michael Mauro’s bid for a second term as the state’s commissioner of elections. The margin of victory in the race is less than 30,000 votes out of the more than one million votes cast.

“What I feel is gratitude, most of all to the voters,” Miller said last night. “I appreciate the fact that they came out and voted for me, yet again, in a more challenging year than before.”

Republican Brenna Findley left her job as Congressman Steve King’s chief of staff and raised over a million dollars for her race against Miller.

“We were standing up for the constitution, standing up for Iowa’s economy and to reform government — some much needed reforms,” Findley told reporters last night, “and I think those are messages that resonate with Iowans because those are things we all care about.” 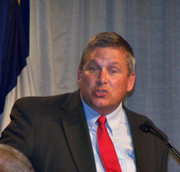 Secretary of Agriculture Bill Northey beat Democratic challenger Francis Thicke by more than 25 points. “I think it’s a combination of a lot of things,” Northey said last night of his victory. “We worked hard the last four years to get out and meet the people of Iowa. I think we did have a different vision of where things were going and what we wanted to see happen and I think the opportunity to grow jobs in Iowa from agriculture certainly resonates in a year like this as well.”