You are here: Home / Fires/Accidents/Disasters / Iowa among top ten for car-train collisions 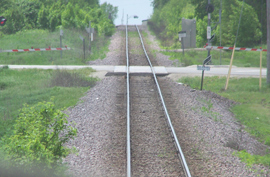 Iowa ranks among the top-ten states for the most vehicle-train collisions, according to a study from the Federal Railroad Administration.

Carol Daley, spokeswoman for Operation Lifesaver, is reminding Iowa motorists it could be a deadly mistake to try and beat a train across the tracks.

“It takes a mile or more for a locomotive engineer to stop a train because of its size and its weight,” Daley says, “which is the equivalent of 18 football fields.”

Iowa ranks tenth in the U.S. for most vehicle-train crashes with 71 incidents reported in 2008. Five of those crashes resulted in deaths, along with 25 injuries. Daley says Iowa motorists need to be careful not to let themselves be boxed in at railroad crossings.

“When you’re coming to a crossing, don’t get trapped on the railroad crossing,” she says. “Make sure there is room for your vehicle to get to the other side before you begin crossing.” Also in 2008, two pedestrians were killed in Iowa by passing trains and six others were hurt. Daley says trespassing is a huge problem for railroads and she has a warning for pedestrians, hunters and anyone else on foot near tracks.

“They can only cross at the designated public crossings with either a crossbuck, a flashing red light or a gate,” she says. “If they cross anywhere else on the tracks, that is trespassing because they’re on private property.” That action can bring a ticket or a fine. Daley says Iowa children need to be reminded about the dangers of venturing near train tracks.

“There’s no playing on train tracks at all and I know kids are kids but they need to stay away and stay off,” she says, quoting the slogan: Stay Away, Stay Off, Stay Alive. Texas had the nation’s most railroad crossing collisions in 2008, with 228 accidents that resulted in 17 deaths, in addition to 29 pedestrian deaths.

Operation Lifesaver is a non-profit group launched in 1972 to stop deaths and injuries involving trains, pedestrians and the railroad.