You are here: Home / Sports / Robinson expected to play for Hawkeyes against Northwestern 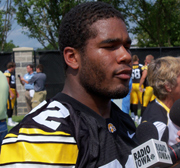 Iowa coach Kirk Ferentz says leading rusher Adam Robinson will be back in the lineup this weekend when the Hawkeyes visit Northwestern.

Robinson missed Iowa’s 18-13 win at Indiana after he apparently suffered a concussion in a win over Michigan State. Ferentz refused to specify what the injury was during his weekly news conference.

Ferentz says Robinson is at practice today and has been lifting and running and is good to go. Freshman Marcus Coker filled in against the Hoosiers and rushed for 129 yards.

Ferentz says it was a good first step for Coker and says he is a lot better player than he was back in August. He says Coker did a lot of things behind the scenes that made him feel better about Coker playing.

Ferentz says true freshman James Morris continues to make strides at linebacker and says the Solon native will remain in the middle. Ferentz says Morris is playing better than anybody and will continue in the lineup when Jeff Tarpinian comes back, as he slides into where Tyler Nielson has played before going out with an injury.

Northwestern has been a thorn in the side of the Hawkeyes. They have won the last two meetings and Ferentz says it begins with turnovers. He says they’ve done the things they’re supposed to do by not turning over the ball. Iowa did not play well in an 18-13 win at Indiana but Ferentz says they were thrilled to come away with a victory. He says the conference is competative and you are due to have a game like that and the first thing is to “get out alive” which they did and now they have to face a team they have not beaten in a couple of years.