You are here: Home / Business / State alcohol sales down slightly in October 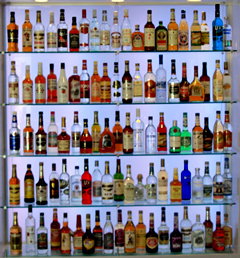 State alcohol sales for October were down just a bit, in an indicator that Iowans may be keeping a tight grip on their money this holiday season.

Iowa Alcoholic Beverages Division spokesperson, Tonya Dusold, says October is the time when purchases are made for holiday sales.

Dusold says October is the month where most of the gift packs and holiday special items are sold and they were down 1.6% in revenue compared to last year, but were close to even in gallons sold.

The sales for October were $24.2 million. Dusold says the drop could be due to the way the calendar days set up. She says the month began and ended on a weekend, which gave them a few less sales days in October, and some of the holiday purchases could have been made in September and skewed the numbers a bit.

Sales for the first quarter that ended in September were up 1.9% or around $985,000. With the October sales added in the state continues a trend of small increases. Dusold says they are up a little less than one-percent or roughly 600-thousand dollars in overall sales over last year. Dusold says people seem to be looking for the best value they can find.

“The numbers do make it look like people are back to trading down to value brands, you know a little bit more of your value vodka versus your top shelf sort of thing,” Dusold says. She says they are seeing more sales of the very large bottles of vodka — which are cheaper overall — as people look to get more bang for their buck. Dusold says retailers appear to be looking to increase sales in some brands through more flavored alcohol.

Dusold says flavors have traditionally been used in vodkas and cordials, but now they are seeing flavors in whiskeys and bourbons, with flavors such as black cherry, cherry, caramel and honey. Year-to-date sales totaled $77.3 million for the fiscal year that began July first.