You are here: Home / Human Interest / The 11th day of the 11th month an emotional time for many

Five decades ago, about 8,000 soldiers from Iowa were sent overseas to serve in what is sometimes called the “forgotten” war. A few dozen veterans of the Korean War were among the crowd at a Veterans Day observance in Des Moines.

After the ceremony, Eugene Danley of Des Moines walked around the Korean War Memorial which sits to the southeast of the state capitol. “Fifty-eight years ago today I got discharged.  Sixty years ago yesterday, my friends and neighbors drafted me,” Danley said, his voice breaking with emotion. “I was in Korea in ’51 and ’52.”

The Korean War Memorial in Des Moines has a central stone tower, surrounded by stone markers carved with information and maps about Korea. Max Judkins of Des Moines took some time today to study the markers. “The first one I looked at was the names of the places where they’d had battles over there and it was, well, bad memories when you read names like Old Baldy and Heartbreak Ridge and Pork Chop and T-Bone,” Judkins said, as tears formed in his eyes. “Too many people died over there. Too many.”

Five hundred Iowans are among the 37,000 American soldiers who died in Korea. Judkins was among the soldiers who rotated through the 10-month-long fight to take and keep what was officially known as “Hill 266” in Korea.

“Old Baldy was a hill that was lowered eight meters from the top of it from the artillery and the battle that took place there,” Judkins said today, nearly 60 years after the battle. “And I just happened to be part of one of them.” 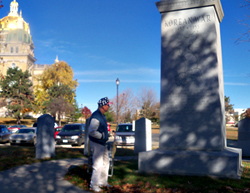 “I don’t care what you say,” Mandt said. “When they play ‘Taps’ it still brings goose pimples up on my back.”

Many of those who gather at Veterans Day ceremonies today wear clothing or hats which illustrate their service in the military.  Gene Garton of Des Moines wore a coat with the word “NAVY” in large letters.  Garton stood with his wife and his young grandson at a mid-morning ceremony on the statehouse grounds that featured prayers, a 21-gun salute and the playing of ‘Taps’.

“You have to, you just have to — in remembrance of all of those boys,” Garton said. “I’m a Vietnam vet and it kind of touches me.”

Garton served as a radio man for the Navy in Vietnam’s Mekong Delta.