You are here: Home / Human Interest / Today honors those who “put it all on the line” 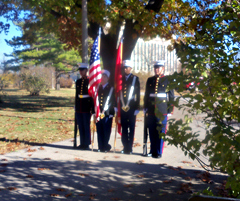 Iowans are gathering at ceremonies around the state to mark this Veteran’s Day.

A crowd of veterans and their families assembled near the Korean and Vietnam War Memorials on the statehouse grounds today for a brief outdoor service. Pastor Michael Demastus of the Fort Des Moines Church of Christ gave the invocation.

“I thank you, God, that there were many who stepped up and obeyed the call of duty and they said, ‘My family, my life, my country — it’s worth fighting for,’ and God I thank you that we can gather here today and remember them and pay them honor and tribute,” Demastus prayed.

“It’s such a blessing to know that there are others who care so much about this nation. We pray, God, that we would just pause this day and remember and give them the due tribute that they deserve.”

Wreaths were laid on the Iowa memorials to veterans who served in Korean, Vietnam and in the modern-day wars in Iraq and Afghanistan. Ray Reynolds served a tour of duty in Iraq in 2003 and 2004 and he was the keynote speaker at today’s mid-morning service in Des Moines.

“And I ask you, the ordinary Iowan, what have you done to earn your piece of freedom for this country?” Reynolds said. “Today is about those who stood up and said, ‘I’ll go.”

Reynolds is a retired 22-year veteran of the Iowa National Guard who currently serves as the State Fire Marshal. “Not since our ‘greatest generation’ of World War II has in our country seen so many veterans in our citizen ranks,” Reynolds said.

Reynolds has been a chaperone on four of the “honor flights” that have ferried Iowa’s oldest veterans so they see their World War II memorial in Washington, D.C.

“I met men who treaded in water in Pearl Harbor for two hours, waiting for a ship to pluck them out of the oil-coated, burning waters,” Reynolds said. “I met a man who dug five fox holes in the frozen timber line at the Battle of the Bulge and then lived in that tiny hole for two weeks while the Germans fired artillery rounds at them night and day. I met a nurse who tore up anything made of cloth that she could find just to stop the bleeding from the wounds of hundreds of injured sailors from Pearl Harbor — and she said the injured just kept coming through the doors.” Reynolds also met an Iowan who was there when the flag was raised at Iwo Jima.

Members of the Marine Corps League shot off a 21-gun salute and a bugler played taps just before the pastor delivered a benediction.

“Most of us enjoy time online, but today is about those who have put it all on the line — our soldiers,” Pastor Demastus said. “Remember — all day — thank them, but not just today — every day.”