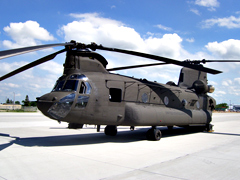 The Iowa National Guard is mobilizing soldiers from eastern Iowa for a new mission to Iraq. Several units of the National Guard’s 2-211th General Support Aviation Battalion are being deployed.

This mobilization will include about 75 soldiers, all based in Davenport. Hapgood says the battalion flies and maintains Chinook helicopters for a variety of missions.

“The Chinook helicopter is a wonderful machine,” he says. “You can do so many different things. This unit is highly skilled. Whether you’re lifting heavy objects or moving supplies or people or doing other kinds of missions whether it’s some kind of tactical mission, like an air assault mission, or they could be used in humanitarian relief situations, they can do that as well.”

A sendoff ceremony is scheduled for next Monday, November 22nd, in Davenport. After that, the troops will head for training in Texas, then to Iraq for what’s expected to be a year of duty.