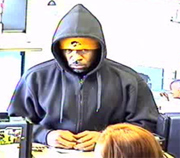 Des Moines Police arrested a man and took two others into custody shortly after a bank robbery today on the capital city’s southeast side.

Sergeant Jeff Edwards says 43-year-old Thomas Harrington is accused of taking cash from a Bank of America branch. He did not display a weapon, but passed a note to a teller demanding money.

“The bank teller was able to insert a tracking device with the money that was passed to Mr. Harrington,” Edwards said. Officers used the tracking device and found Harrington in a car with two other people on the northwest side of town. Witnesses to the robbery said the suspect was a black male, wearing a black hooded sweatshirt and a black Iowa Hawkeyes stocking cap.

“A couple of the witnesses came to the scene and positively identified Mr. Harrington,” Edwards said. “A search of the vehicle also located money taken in the robbery, along with the tracking device.” Harrington is charged with 2nd degree robbery. The other two persons in the car have not been identified or charged.

Edwards says investigators are not sure yet if Harrington may have been involved in several other recent bank robberies in Des Moines.