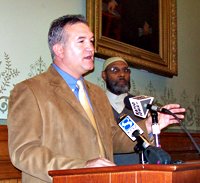 The leader of Democrats in the Iowa House says he’s proud of what Democrats accomplished at the state level in the past two years, and there’s was nothing his party could have done to avoid huge losses in the state legislature this year.

The 40 Democrats who’ll serve in the Iowa House next year met today and elected Kevin McCarthy of Des Moines to serve as their minority leader.

“Nationally, Iowa’s one ship in a very large storm and some serious set-backs were dealt to Democrats nationally,” McCarthy says. “It’s really pretty epic in scope, what occured around the country.”

A Republican governor will be inaugurated in January and 60 Republicans will lead the 100-member Iowa House.  The state senate is still in Democratic hands, though, and McCarthy says that means voters want “divided” government, with bipartisan solutions.

“As long as the Republicans operate in the mainstream,  focusing on bread and butter issues, we will be a loyal opposition party and we will help and try to improve legislation and work with them in a very cooperative fashion,” McCarthy says. “If they steer towards a more extreme approach, whether it’s social extremism or whether it is policy extremism at the expense of ordinary Iowans, then we will let our voices be heard and they will be heard very loudly.”

Democrats are willing to discuss making cuts in the current year’s state budget, according to McCarthy. He says some of the cuts, though, may be merely symbolic.  For example, McCarthy predicts Republicans will close down programs like the Iowa Power Fund which was a pet project of Democratic Governor Chet Culver, but the G.O.P. likely will shift the money to other programs so it’s still being dedicated to economic development.

McCarthy had been the majority leader in the Iowa House.  The speaker of the House, Democcrat Pat Murphy of Dubuque, did not seek a leadership post and McCarthy declined to tell reporters whether he had been challenged in his bid to remain a House leader.