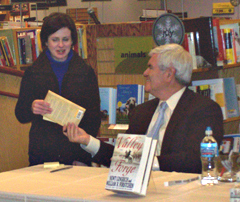 Newt Gingrich touted his new book while in Iowa.

Former House Speaker Newt Gingrich says he’s weighing whether he can impact politics at every level of government, not just the White House, if he were to run for president in 2012.

“Could we build a movement of replacement big enough that it would be able to effect deep into the elected system, not just the presidency? There are 513,000 elected officials in the United States and if you really want to fundamentally make this country competitive and healthy and capable of creating a better future, you’re talking about a wave of change much deeper than just the presidency,” Gingrich says. “And I’m frankly trying to sort out whether that is doable and whether or not I’m the right person to try to do it.”

Gingrich will decide whether he’ll run for president by February or March of next year. Gingrich is in the midst of a two-day book tour through Iowa, giving lectures today in West Des Moines and Ames about his new book, Valley Forge, and people in the audience want to see Gingrich run. 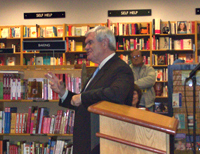 Newt Gingrich speaks during a book tour stop in Iowa.

Newt Raddatz of Creston drove for about an hour and a half to hear another Newt — Gingrich — speak about George Washington and the Continental Army.

“The hardships of the people most people don’t know about, we never learned in school.  We heard they had a time of it, but not (about) going barefoot in the snow and going nine miles and then standing there to fight the next day,” Raddatz said. “It’s good to find out the truth.”

Raddatz, his wife and their adult son, Doug, all hope Gingrich runs for president. “He seems like a pretty easy-going, down-to-Earth guy who is just going to tell it like it is,” Doug Raddatz said.

Myrna Beeber lives about 50 miles from the West Des Moines book store, in the small town of Yale, Iowa, and she had Gingrich autograph a book for her son. “My son Brad’s in Afghanistan with the Iowa National Guard and (Gingrich) said to Brad, ‘Thank you for serving our country and keeping us free. Your friend, Newt,'” Beeber said, showing a reporter the autographed title page of Gingrich’s latest book. “Isn’t that great?”

Tomorrow night Gingrich will be at a Cedar Rapids bookstore to speak and then sign autographs.

Gingrich was among the national political figures who weighed in this fall on Iowa’s judicial retention election. Now that three justices on the Iowa Supreme Court have been booted, Gingrich told a small group of Iowa reporters this afternoon that it’s time for the four remaining justices to resign.

“This is pure Thomas Jefferson — if the integrity and the authority of the system comes from the consent of the governed — which is the Declaration of Independence — then the governed have indicated that they don’t agree with this court,” Gingrich said. “And I don’t think anybody in this state believes the other four justices would have survived, and so I think if they have any sense of integrity about protecting the courts, they’ll step down.”

In addition, Gingrich would like to see congress abolish part of the federal judicial system.  His target is the Ninth Circuit U.S. Court of Appeals in California, Oregon and Washington state.  “Since 1958 we have allowed this whole model of judicial supremacy to run amok so that lawyers rig the game in favor of lawyers and you have a very elitist view in which they impose on the rest of us things that are absurd,” Gingrich said in West Des Moines this afternoon.

Gingrich’s latest book is a fictional account of what George Washington and the Continental Army endured at Valley Forge in the winter of 1777.