You are here: Home / Crime / Courts / Issues “continue to emerge” as IASB recovers from “fiasco” (AUDIO) 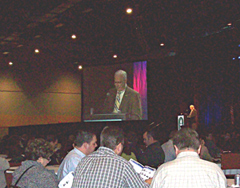 Two Iowa Association of School Board leaders say the organization has “weathered” a “fiasco” over the past nine months, emerging as a “leaner, stronger and more effective” group.

About a year ago problems began to surface and the group’s executive director eventually was fired after she allegedly raised her own pay significantly. Early this year legislators held statehouse hearings, questioning whether tax dollars had been misspent by the association.

This week over a thousand school board members and administrators from around the state are in Des Moines for the annual meeting of the Iowa Association of School Boards. Veronica Stalker, the group’s interim executive director, gave a convention speech that was a bit of a status report.

“I had a beautiful speech with slides — flashy and glitzy — and a day and a half ago I threw it away,” she said. “And I said: ‘There are too many questions in the field. There are too many issues that continue to emerge, too much that is facing us and continues to face us not to deal with it head on.”

Stalker took over as the association’s chief executive in early May. “I could not stand back and watch a fine, respected organization be shot down by external forces,” Stalker said, to scattered applause from the crowd.

Stalker defended the board that oversees the organization — a panel made of up school board members from around the state.

“There are a few who continue to say, ‘Where was the IASB Board?  Shouldn’t they resign?” Stalker said. “You don’t let all that institutional memory and dedication to an organization walk out the door.  If people are dissatisfied with decisions our board made, there’s a process.”

Stalker pointed out that of the five board seats up for election this year, three incumbents have no challenger. There’s someone challenging an incumbent in another district and, in the fifth district, no one has yet stepped forward to run for that slot.

Stalker also addressed complaints about the group’s shift to being required to open its meetings and records to the public.  A law that became effective January 1 made the Iowa Association of School Boards subject to the state’s so-called “Sunshine” Law.

“We don’t have that clarity yet. We don’t know the ramifications and the reasons that allow us to go into closed session,” Stalker said.  “We don’t know what is proprietary, legal, business-services-protected discussion, and until we know that, we are proceeding with caution.”

Stalker calls it a difficult transition for the group. “Should we throw everything open to the media and to our members? Absolutely!  I’d like nothing better,” Stalker said. “However, once you open everything, you can’t protect anything.”

Russ Wiesley, a Waukee school board member, is president of the board of directors for the Iowa Association of School Boards.  He briefly addressed the organization’s members this morning.

“We have weathered some very difficult times these past nine months and you being with us has really helped us,” Wiesely said. “The continued support we have received has been wonderful, but with your support and encouragement, a great staff and board, and a focus on our mission we promise to do our very best to be worthy of your trust again.”

Listen to this morning’s speeches from the two Iowa Association of School Board leaders:  IASBconvention