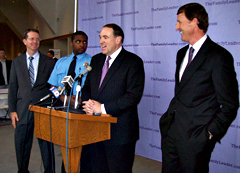 Speakers at a Sunday afternoon event in Des Moines urged “faithful people” in Iowa to push social issues like abortion and traditional marriage to the top of the political agenda.

Former Arkansas Governor Mike Huckabee — winner of the 2008 Iowa Caucuses — flew in to be the keynote speaker at the Iowa Family Policy Center’s “Celebrate the Family” event.

“A lot of times people want to read something into every visit I ever make to Iowa and assume that there’s some ulterior motive going on,” Huckabee said, before joking. “And I’m not here to announce any plans — or to deny any plans.”

Huckabee told reporters earlier in the afternoon that he is considering another run for president. The capstone of his speech the crowd in the church sanctuary was a call to arms on the abortion issue.

“My friend, the future of America is not in its tax policy,” Huckabee said to conclude his remarks. “It’s in its recognition of a Holy God and the people he creates and whether or not we will stand with Him and for them.”

Huckabee said “faith-based” voters are too often “ridiculed” or “sneered at” for their beliefs, including the belief that a family should be headed by a man and a woman who are married.

“I don’t care how much we change the tax code and the tax policy, we will never be able to get our economy righted because what has wronged it is not just an economic issue,” Huckabee said. “It is an issue that goes to the very heart of what The Family Leader and organizations like it are about and that is that the most basic form of government is not the government that we elect to go to Washington – or for that matter, Des Moines. The most simple form of government is the government that exists right there in the home.” 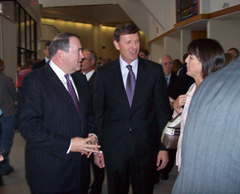 Mike Huckabee and Bob Vander Plaats talk to a supporter.

“The Family Leader” is the new name of an umbrella organization that includes Marriage Matters — a counseling program for couples, the Iowa Family Policy Center and the group’s the political action committee.

Bob Vander Plaats, a three-time candidate for governor, led the successful effort to oust three Iowa Supreme Court justices who joined the ruling that paved the way for gay marriage in Iowa.  He’s now the president of The Family Leader.

Chuck Hurley, president of the Iowa Family Policy Center, also spoke to the crowd, which was estimated at 1500. Hurley held up a “vote no” sign to celebrate the outcome of the judicial retention election.

“And we are urging the remaining four Supreme Court judges to honor ‘We, the People’s’ verdict from Election Day when we found them guilty of unconstitutional behavior,” Hurley said, as the crowd applauded.  Hurley said by resigning, the four justices who are still on the court could avoid more “expensive” judicial retention battles.

Hurley said his group would work to “restore a pro-family culture” in America and may be a player in helping decide who becomes the next president.

“We have already begun evaluating the likely candidates according to a Biblical, timeless standard,” Hurley said. “…We plan extensive interviews using this standard…with the possibility of an endorsement and joining with other state and national groups to maximize our impact in the presidential race.”

Another leader of the Iowa Family Policy Center called it a “Christ-centered” organization that “champions” that idea that “God is the ultimate leader of the family.”

Listen to the three speeches: