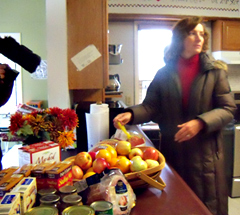 First Lady Mari Culver delivered the fixings for a Thanksgiving meal to homeless shelters in the Des Moines area today.

“You know you need to start defrosting early,” Culver joked as she patted one of the frozen turkeys she took into a homeless shelter for teenagers.  “A couple of days in the refrigerator would be good.”

The Iowa Turkey Federation donated the frozen birds. The Culvers and the governor’s staff donated the rest of the food, including staples like dinner rolls, fresh fruit and a ham.  Mari Culver talked with reporters in the shelter’s kitchen.

“Hopefully this will make people think about remembering those in our community who are less fortune, not only at the holiday times, but throughout the year,” Culver said, “and to look into those organizations that serve the under-served in Des Moines and throughout the state and to remember those folks with donations, whether financial, food or clothing not only during holiday times, but all times during the year.”

Earlier this year, Mari Culver helped paint the shelter’s dining room. Brad Whipple, director the Iowa Homeless Youth Centers, says some of the homeless teens who will sit around the table in that dining room on Thursday will be having their first-ever Thanksgiving Dinner.

“They really do appreciate it. You know, when it’s out of their norm, when it’s not something that they’re had before, when it hasn’t been their experience — when they have the opportunity to have that, I think it’s a huge blessing to them. It’s a huge benefit to them,” Whipple said. “…A place and the right food for an experience for them to really be thankful for what they have this year.”

Whipple said in this month alone his shelter has been unable to provide housing to 19 kids who are homeless and out on the streets of Des Moines. Nine kids will be living in the shelter on Thanksgiving Day when that donated meal will be served. “This helps us to show value to these kids.  Celebrating this holiday with them is big and it’s important,” he said. “Just because they’re homeless doesn’t mean that they don’t deserve a Thanksgiving.”

Delivering the makings for a Thanksgiving meal to Des Moines-area shelters that house the homeless as well as victims of domestic violence has been a tradition for Mari Culver for the past four years. “And even though Chet will be leaving office, we’ll continue to do it. I wish the kids were out of school and could go with me this year. They’ve gone in year’s past, but it is important and it’s easier for all of us to remember at the holiday times to remember those who are in need,” Culver said. “The more difficult thing is to try to do it throughout the year.”

Culver has some advice for Iowans as we approach Thanksgiving:  “Instead of looking around at what’s wrong or what could be better, take a look at what’s closest to you and be thankful for your health, for the fact that you have a home, which many people don’t. I mean, we’re here at the center where homeless children live. We were just at a shelter where there were a lot of children, adolescent children who don’t have anywhere to go, so know what’s important and be thankful all year round, not just at Thanksgiving.”

Culver told reporters she’s grateful for the family vacation she, the governor and their two children took after this year’s election. Her husband lost his bid for a second term and both Culvers are in the midst of a job hunt.