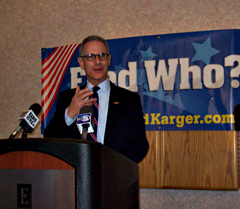 A retired political consultant who is gay says he’d consider it a “victory” to be included in the debates for 2012 Republican presidential candidates.

Fred Karger has just spent about $1000 to run a 90-second commercial about himself on the FOX News Channel in seven different Iowa media markets for the next week.

“As I look at the Republican Party membership here (in Iowa) and I’ve seen polls, you know, 80 percent self-identify evangelical and I don’t know how open they are initially to an openly gay candidate if I do decide to run,” Karger says.

Karger held a news conference in Des Moines this morning, telling reporters his goal is to emulate candidates like Shirley Chisholm, the first African American to run for president, and be the first openly gay candidate for president.

“I’m a fighter.  I’m fighting for millions of people around this country who are members of my community and so many others who are deemed second class citizens,” Karger said. “We will no longer accept that classification.”

Karger, who said he was so “disenchanted” with the Republican candidates of 2008 that he supported Hillary Clinton’s 2008 bid for the White House, calls himself an “independent Republican” in the ad.

“I think the Republican Party has moved so far away from mainstream America that it is losing tremendous support, people like me,” Karger said.  “I’ve never left the party. I’ve worked for, you know, literally hundreds of Republican politicians if you look at my resume — from, you know, Richard Nixon to Ronald Reagan to work with Barry Goldwater and Robert Dole and everything — but you know they were not necessarily the kind of divisive leadership that we have (today) in some instances.”

Karger has hired a state director for his exploratory committee, a step nearly all presidential candidates take before making an official plunge into the race.  Karger, who is 60, described himself as the “worst nightmare” for his adversaries because he’s retired and has all sorts of time to campaign.  He’s also researching legal strategies to try to get a spot on stage when televised debates are held.

“If I can get in some of those early debates, I will declare victory,” Karger said.

But Karger also admitted his candidacy is “a little presumptuous” because he’s never held office before.

(This story was updated at 2:30 p.m. with a different figure in the second paragraph.  Karger state director Nathan Treloar says $1000 being spent, not $100,000 as previously reported to reach seven media markets in Iowa this week.)