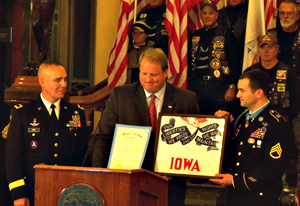 A ceremony at the state capitol today recognized Sal Guinta , the Hiawatha native recently awarded the Medal of Honor.

Iowa’s Governor Culver was among several hundred public officials, veterans, servicemen and others who gathered in the capitol rotunda to honor the Staff Sergeant Guinta.

“He has set the very highest example for all of us, so I say to Staff Sergeant Guinta, for your courage bravery and selflessness, on behalf of all Iowans, we thank you very much,” Culver said.

Guinta was given the nation’s highest military award for his actions in Afghanistan to save two fellow soldiers. He received the Medal of Honor one week ago and has been all over the country doing interviews since them. This was his first visit back to Iowa since the award ceremony.

“I’ve been a lot of places lately, and one place I’ve always held near and dear to my heart is home, and home to me is Iowa,” Guinta said.

Guinta  credited the words of his family, friends, teachers, and fellow soldiers for giving him the support he needed to accomplish what he had done. He also credited those who have served the U.S. in all branches of the military.

Guinta said he wears the medal of honor for all those in the service of our country and especially for those who have given their lives. “They’ll never be able to come home and give their family hug or kiss or a congratulations or a welcome back. And I wear this for them, this isn’t mine, I’m just holding onto it for right now. For those men and women who have paid the ultimate sacrifice so we can live in this country, and we can live in this beautiful state and feel protected here at home, this is for them, to them,” Guinta says.

Guinta’s mother, father, wife and other family members were present today. Following his speech, Guinta stood in the governor’s office and met and shook the hands of the people who turned out to see him on his day.