You are here: Home / Crime / Courts / K9 sniffs out marijuana in “wedding gifts” during traffic stop

Authorities in southwest Iowa this week arrested a motorist after a K9 sniffed out drugs in a couple of gift wrapped boxes.

Pottawattamie County Sheriff Jeff Danker says deputies stopped 51-year-old Robin Klein of Portland, Oregon for speeding on Interstate 80 Sunday afternoon. “A search was eventually made and they located two packages that were wrapped, supposedly wedding gifts, but they contained marijuana,” Danker said. “The dog actually indicated on the trunk of the vehicle and when it was opened, there was a very strong smell of marijuana.”

The packages were wrapped with bows. More marijuana was found in a garment bag, along with $6,500 in cash. “There was about 65 pounds of what we believe is high grade marijuana,” Danker said. Klein was charged with possession of marijuana with intent to deliver. She was released on bond Monday. 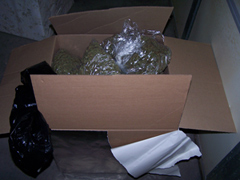