You are here: Home / Weather / Winter weather advisory in effect for several counties 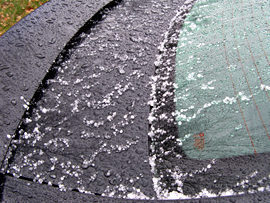 Freezing rain is falling on many parts of the state.

Iowans heading to northern parts of the state on this busy travel day may encounter foul, frigid weather.

Meteorologist Craig Cogil, with the National Weather Service, says some 32 Iowa counties are under an advisory through midnight tonight.

The Winter Weather Advisory covers much of the northern third of the state, with the forecast calling for freezing rain developing during the morning and continuing into the afternoon.

The advisory covers an area from Sioux City to Fort Dodge to Charles City and all points north. Cogil says the roads may be getting very slick, so drive with extra caution. He says there may be ice accumulation of between one-tenth and two-tenths of an inch. Cogil says the forecast calls for a dreary, chilly start to the holiday weekend.

Once the storm system pulls out, it’ll still be cold but should also be dry for much of the rest of the weekend, at least Friday and Saturday. There is a chance for rain late Sunday as Iowans head home after the four-day weekend.

Find out more on the National Weather Service website.