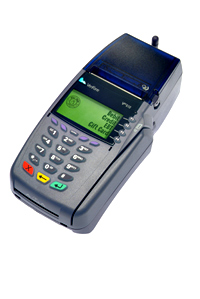 Portable electronic credit card readers are being used by the Salvation Army for donations.

The Salvation Army’s annual red kettle fundraising campaign is underway again, and at some locations you can now pull out your plastic instead dropping paper money or coins in the kettle.

The development director for the Salvation Army in central Iowa, Arvid Huisman, says some of their kettles are using machines that allow you to swipe a credit or debit card to make a donation.

Huisman says it’s identical to what you would find in a small business, but in the business the terminal would be connected by a phone line. The Salvation Army’s electronic terminals use a cellphone type connection. Huisman says more and more people use debit and credit cards now and these electronic kettles can accomodate them.

Huisman says a lot of times people see a red kettle, but don’t have cash to make a donation. He says these units allow them to make a donation with a safe encrypted system that also gives them a receipt. Huisman says they have six of the machines in the Des Moines area, and others in smaller cities. He says they have single units in Boone, Ottumwa, Fort Dodge, Marshalltown, Newton, as the Kum and Go corporation gave them a grant to put the machines in those cities.

Huisman says they’re hoping the electronic kettles will bring in more money by making it more convenient for people to donate. Huisman says research was done in several Salvation Army markets, with the closest one to Iowa in Colorado Springs and Dallas Fort Worth. Those surveys found an electronic kettle generated about seven times more contributions than a cash-only kettle, and the average gift was about 14 dollars.

Huisman says they don’t know how much the average donation is for a cash-only kettle as they don’t track it. One drawback of the e-kettles is the cost to get them going. Huisman says it costs around $800 for the readers and then there are other service charges. Jim Sullivan with the Salvation Army chapter that covers eastern Iowa says they have some of the machines, but says the cost can be prohibitive in smaller towns.

Sullivan says if your kettle makes $600 to $1,000 a season, then that’s a big dent in your intake. He says they have also found that the batteries wear down very quickly in the units if they are outside in the cold, so it is best to have them inside in the foyer of a store or a mall. Sullivan says it is a technology that is going to be used more in the future, but they have to weigh the costs against the benefits they’ll bring in.