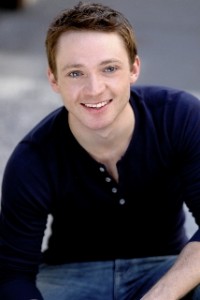 A Knoxville, Iowa, native will be making his home state debut as the touring Broadway production of “Mary Poppins” opens today in Des Moines.

When Eric Hatch graduated from Knoxville High School about a decade ago, he says he had the urge to perform and to travel. Hatch spent a year at Tokyo Disney and landed in New York, where he worked odd jobs and acting jobs, eventually getting a part on the Broadway version of “Mary Poppins” which brought to Los Angeles and then this nationwide tour.

The 28-year-old Hatch is part of the ensemble cast. “We’re really on stage most of the time,” Hatch says. “We don’t have much down time and when you see us on stage, we’re out there singing and dancing but when we’re not we’re changing clothes and doing a lot of makeup.”

Hatch says he’s having the time of his life playing so many parts in the same night, every night. “One of the first times you see me in the show, it’s Jolly Holiday and I play a pan, which is a half man-half goat,” Hatch says. “Then the next thing is, I take off all that makeup and I come out and am an adult banker, working, doing the daily grind. It’s just funny because there’s so many different things that we play in the show.”

He grew up going to shows at the Civic Center of Greater Des Moines, but never dreamed he’d be performing there. “To be at the Civic Center is really neat because now I get to be on the other side of it,” Hatch says. “I’ve never been on the stage at the Civic Center. I’m excited to play Iowa so all my family and friends can come and see what I do every night. They always thought it was kind of a hobby for me and some people still don’t know that I made this a career and this is what I do for a living.”

The show runs through December 12th. For details, visit www.civiccenter.org