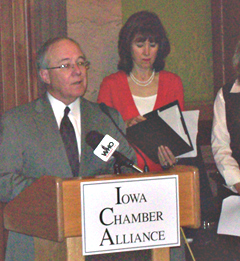 For almost a decade, the Iowa Chamber Alliance has been pressing for the proposal Governor-elect Terry Branstad now promises to implement — a public-private partnership that will replace the Iowa Department of Economic Development.

The statewide group is made up of the 16 largest chambers of commerce in Iowa. Ken Anderson of the Marshalltown Area Chamber of Commerce is the new president of the Iowa Chamber Alliance. “This is clearly a challenging time and Iowa must be more innovative in the delivery of the services to meet the 21st century challenges,” he says.

Dan Culhane, president and C.E.O. of the Ames Chamber of Commerce, says it’s time to change the state’s approach to business retention, recruitment and site selection. “We all use the public-private partnership model in our local communities,” Culhane says. “It works well for us and we believe it will work well for Iowa.”

The current 15-member board that oversees the Iowa Department of Economic Development is made up of a lawyer, a couple of bankers and eight business executives, but Culhane says a “perfect” public-private partnership would engage the private sector more in the economic development efforts of the state.

“If you look at local boards of directors of local economic development organizations, the vast majority of those people are made up of private-sector plant managers, business leaders, school superintendents, mayors and people like that are public as well, but there’s also a large faction of the private sector that’s at the table, too,” Culhane says.

Just what form this new state-level “public-private partnership” will take is the main project of Siouxland Chamber of Commerce president Debi Durham, the former leader of the Iowa Chamber Alliance. Durham has just signed on to be Governor-elect Branstad’s economic development chief.

“We’re in the process of doing extensive research of public-private partnerships across the country and what I can tell you in my at least initial assessment that there’s not a perfect model out there, so Iowa will be creating that perfect model,” Durham joked this week during a news conference with Branstad. “We’re going to take the best and the lessons that we’ve learned around the country. We’re going to do an assessment of what the department currently has.”

Branstad intends to call the new quasi-government agency the Iowa Partnership for Economic Progress.  He envisions including groups like the Iowa Business Council, the Iowa Association of Business and Industry and the Iowa Chamber Alliance in the new organization that will replace the Department of Economic Development.

David Goodner of Iowa Citizens for Community Improvement says his group will ask legislators to reject the proposal. “CCI members are planning to fight it tooth and nail, absolutely, because we want policies that put people before profits and we see this proposal as being the exact opposite,” Goodner says. “The big-moneyed interests that gave Branstad the campaign cash he needed to win the election — it’s going to be great for them, but it’s going to be bad for regular folks.”

Goodner says private business interests already have a lot of input into the management of the current Department of Economic Development, and Branstad’s proposal skews that even more.

“The way we read it, it’s a blatant attempt to privatize economic development which is just going to allow big-moneyed special interest groups like the Iowa Association of Business and Industry to, you know, dole out taxpayer money to corporate interests without any kind of real public oversight,” Goodner says.

Branstad does not have the authority to abolish the Department of Economic Development and replace it with the public-private partnership he envisions. Any changes Branstad proposes for the agency must be approved by the Republican-led Iowa House as well as the Democratic-led Iowa Senate.