Around 500 people braved a temperature of 11 degrees, winds of 25 miles an hour and a wind chill of seven-below zero to jump in Clear Lake Sunday as part of an annual fundraiser.

More than $20,000 was raised for Toys for Tots and the Make-a-Wish Foundation as part of the 13th Annual Clear Lake Polar Bear Club swim. Shawn Wumkes of Garner was part of a team from Winnebago Industries and says it was his first time involved in the Polar Bear swim.

Wumkes says he jumped in the provided hot tub after taking a dip in the lake so the experience wasn’t a bad one. 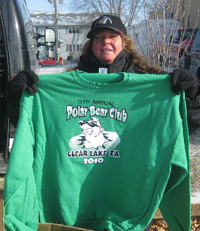 Amy Libra from Thompson has taken the lake plunge five times and says it’s always a thrill. Libra says it’s a lot of fun going with a group, running down to the lake, screaming and holding hands, adding, this is her first time to go underwater during the event. Tisha Macon from New Hampton was part of a group from a dress store in Mason City and says she enjoyed her first time taking part in the frozen lake dunk.

“It was cold but it wasn’t as cold as when you got out,” Macon says. “Your socks are freezing, walking through the sand, trying to find the hot tub.” You can see pictures and video from the event by heading to the club’s website at “facebook.com/clearlakepolarbearclub“.