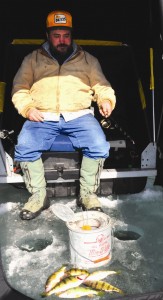 While some folks dread Iowa’s frigid forecast, it’s exactly what others want to hear.

The ice is starting to thicken on many of Iowa’s lakes and it’s already attracting plenty of ice fishermen, especially to places like Spirit Lake. That’s the home base for Mike Hawkins, the Iowa Department of Natural Resource’s district biologist for nine counties in northwest Iowa. Hawkins says he’s seen a lot of ice fishermen up on Angler’s Bay where the thickest, longest ice is located on Big Spirit Lake.

“They’re starting to get out and get after some fish,” Hawkins says.

Some folks have been driving onto the lakes, but Hawkins says that’s dangerous.  “Over the weekend, there was a report of one vehicle that was out on the ice, but I would not suggest that at this point,” Hawkins says. “Folks need to be real cautious. As early as a week ago, we still had open holes on Big Spirit Lake. West Okoboji, for example, the main lake is still completely open. Many of the bays have iced over and folks are starting to venture out onto some of those.”

He says if the ice is two inches thick, you’d be wise to stay off it entirely as at least four inches of ice is recommended for ice fishing and five inches for snowmobiles and ATVs. With eight-to-12 inches of ice, small cars can be driven onto the frozen lakes while you need 12-to-15 inches of ice for a pickup.

Hawkins says the temperature this morning was right around zero in the Spirit Lake area, what some lovingly refer to as “Little Siberia”, with a high yesterday of only eight degrees. While that’s downright arctic for some people, Hawkins says it’s perfect for making plenty of ice and he expects a flurry of ice fishing fanatics on the frozen lakes this weekend.