Chief Justice Marsha Ternus and the two other justices who were voted off the court last month issued a written statement on Election Night, but the brief speech Ternus gave during an awards ceremony in Ames was her first public statement in front of microphones and cameras.

Ternus was recognized by the Youth and Shelter Services organization. The group cited the “one child/one judge” policy Ternus instituted which ensures the same judge deals with a child throughout the entire court system. A 16-year-old who went into foster care at the age of five was there to speak at the awards ceremony and, through her tears, she praised the policy as she’s had the same judge for 11 years. 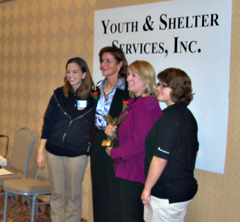 Ternus told the crowd her composure had been shattered by the young woman’s tribute.

“I am truly thankful for the opportunities that I have had as a member of the court to advocate on behalf of children and families. It’s the most important work that I have ever done,” Ternus said, her voice breaking with emotion. “And thank you for this award.”

Her last day on the court is December 31.  Ternus did not directly mention the retention election, but First Lady Mari Culver — a lawyer — did.  Culver was on hand to present the award to Ternus, and she drew repeated bursts of applause from the crowd.

“The political season is over, so I guess I can speak my mind,” Culver said and the crowd erupted in applause and cheers. “What happened in the November elections with our Iowa court system is a stain on the history of our state. It is a travesty.”

Culver called Ternus a “highly-respected leader” and Culver addressed the spectre of future electoral battles for the four justices who remain on the court who joined in the unanimous opinion on gay marriage that sparked voter outrage.

The selection and the retention of judges in this state must remain free from the infusion of petty, partisan politics,” Culver said. “Chief Justice Ternus, your departure from the supreme court is a loss not only to the court and to the whole state, but to the children and the youth of our state.”

Ternus, in her brief remarks, said when she was appointed to the court in 1993 she had no idea her work would include advocacy for children.

“I had not only an opportunity but an obligation as a member of the Iowa Supreme Court to foster the contributions that the court system could make in working with agencies,” she said. “…to do everything we could for the vulnerable children of our state.”

Ternus said there is “no more important contribution to make” than to help children and families in need.