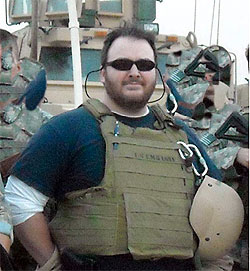 A federal prosecutor returned to his job in Sioux City this week after spending 14 months in Iraq. Assistant U.S. Attorney Forde Fairchild volunteered to help the Government of Iraq train criminal justice investigators and trial officers.

“Basically what I was trying to do is help the Iraqis understand and dismantle terrorist organizations like we dismantle and disrupt criminal organizations here in the states,” Fairchild said. The mission involved working closely with the U.S. and Iraqi military in the fight against the counter-insurgency.

The latter part of Fairchild’s time in Iraq involved daily trips into the “Red Zone” in mine resistant armored vehicles. Fairchild says the hazardous work is paying off. “There is a lot more work to be done, but the Iraqis are definitely making progress on this front,” Fairchild said. “I’m proud to have been part of that.” Fairchild calls his time working with U.S. military members in Iraq “inspiring.” He’s equally inspired by those working for the Iraqi Criminal Justice System.

“They would have a colleague or a family member murdered by a terrorist organization, or they’d have their headquarters blown up, and to watch them get back up and go back to work…it was just absolutely inspiring,” Fairchild said. Fairchild is married with two children – girls, ages 4 and 10 months. His wife, Katie, learned she was pregnant shortly after Forde agreed to serve in Iraq. Fairchild was able to return for the birth of his second child, but was back in Baghdad four days later.

“That experience just impressed upon us what our military families do, you know, two or three times during their five year careers,” Fairchild said. “It’s amazing what they are doing ordinarily that I had to do just this one time.” Fairchild is the fourth attorney from the U.S. Attorney’s Office for the Northern District of Iowa to serve in Iraq.