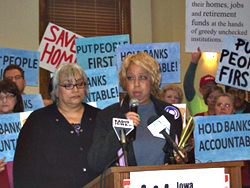 Over 100 activists from around the country, most of whom have fallen behind on their home loans or lost their homes in foreclosure, met with Iowa Attorney General Tom Miller this morning.

Miller is leading a 50-state group investigating complaints about the conduct of the nation’s mortgage industry. Fifty-two-year-old Gina Gates of San Jose, California lost her home through foreclosure in April of 2008.  She made the trip to Des Moines to attend the meeting with the Iowa’s attorney general.

Gates spoke at a news conference, telling reporters she made about a quarter-of-a-million dollars worth of payments on her home, but after a slow-down in her business and some health problems, she couldn’t keep up with the adjustable rate mortgage. She and the other activists are asking the attorneys general to force the mortgage industry to modify loan terms so foreclosures can be avoided.

“It makes no sense to us to foreclose on one family and then sell it to another family for half the price when they could have kept the first family there,” Gates said.

Sixty-two-year-old Mary Raybon of Kansas City, Missouri, told reporters her problems started shortly after her father died. “I ended up with his home and mine,” Raybon said. “My son was moving into my father’s home and just as we were about to put the home in my son’s name he lost his job, so I was trying to help him hold onto that one, helping him with a payment, put me one payment behind…and so it kind of just avalanched from there.”

Thirty-two-year-old Keya Alvarez became an activist on the issue when her 59-year-old mother began having problems with her mortgage holder after living in the home for 24 years.

The group met with Miller in the basement of a Des Moines church, then the activists held a news conference, cheering at the prospect of Miller pursuing criminal charges against what speakers at the news conference derided as “the big banks.”  The activists then loaded onto buses and staged protests at banks in the Des Moines area.

“Are we ready to rumble?” Mike McCarthy of the National People’s Action group asked the crowd as he claimed the microphone at the end of today’s news conference. “I tell you, it may be cold out there but we’re fired up in here, aren’t we?”

McCarthy described Iowa’s attorney general as “the fixer” and the mortgage industry as the “lions” who caused the financial meltdown.