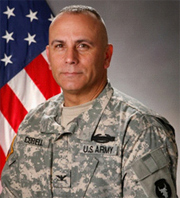 Soldiers deployed during the holidays used to have to wait for letters from home to hear from relatives, but technology has improved that capability.

Colonel Ben Corell commands some 2,800 soldiers from the Iowa National Guard who are on active duty in Afghanistan and while they have the latest technology, Corell says availability is a problem depending on your location.

“As our soldiers move over to the forward operating areas out in the different provinces — the farther you get away from a big installation — the less capability you have,” he says.

Corell says many soldiers have had a tough time adjusting to the fact they can’t just turn on their cellphone or P.D.A. and connect with anyone they want.

The soldiers do have access to satellite phones, but use is limited.  “We limit it to, I believe, 15 minutes per call and I think they get two of those a week,” Corell says.

Communication time is something all the soldiers look forward to according to their commander.  “The soldiers have told me if I can fix anything, can you please work to get additional Internet access, additional phone capabilities so they can make contact back home,” Corell says.

In some instances about 100 soldiers are sharing a single computer, so there are often lines to even access their email accounts.

Corell made his comments in a conference call with Iowa reporters.