You are here: Home / Business / Branstad and his budget chief say it’s time for “lifestyle change” in state gov’t 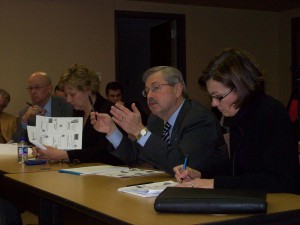 Governor-elect Branstad speaks at budget hearing. To his left is Lt. Governor-elect Kim Reynolds. To his right, advisors Carmine Boal and Jeff Boeyink.

Both Governor-elect Branstad and his budget chief say state government has to go through a “lifestyle change.”

“It’s going to be a challenge, but it’s not nearly as painful as a lot of families have gone through,” Branstad says. “A lot of families have had to cut their budgets substantially, get rid of their credit cards, live with a member of the family unemployed. A lot of companies have done spending cuts. I mean, people have taken salary reductions.”

Over the next few years Branstad expects a reduction in the amount of federal dollars coming into state government. Coupled with state spending promises made in the past, Branstad is suggesting he’ll have to cut about a billion dollars in state spending over the next two years just to break even.

“We still have a huge structural deficit that can only be dealt with if we deal with the budget ‘drivers,'” Branstad says. “And the biggest drivers in the budget are things like school aid, Medicaid, and state employee salaries.”

Nearly 90 percent of the state budget is spent in those three areas.

“Those are the realities that we’re facing and those are sobering realities,” Branstad says.  “I just want to make sure that we make thoughtful decisions and we try to work with everybody to come up with the best way to deliver the quality services that we want to deliver to the people of Iowa, but to do it in a sustainable and affordable way.”

Dave Roederer, Branstad’s budget chief, delivered a budget briefing to Branstad this afternoon. Roederer was the first to suggest state government must undergo a “lifestyle change” in order to pare the budget to an acceptable level.

“There’s no easy solution,” Roederer told reporters, “and it’s going to take a look at how we do business and whether or not there are better, more efficient ways to do what we’re doing.”

Roederer estimates the state will pay nearly $4 billion in salaries and benefits to state workers in the coming year. For more than a month Branstad has made it clear he wants to reopen contract talks with state employees to try to reduce their negotiated pay and benefit packages. According to Branstad, it’s time for “shared sacrifice” on the part of state workers.

“A shared acceptance of trying to deal with these issues and doing it in an equitable way that treats not only public employees in a very fair way, but also treats the taxpayers and the citizens who have made big sacrifices themselves in a fair way,” Branstad told reporters.

The president of the union which represents the largest share of state workers has accused Branstad of trying to pick a fight with state employees even before he takes office.  AFSCME Council 61 president Danny Homan says the union’s new contract includes a “fair and modest” pay increase that rewards workers for taking pay cuts over the past year.