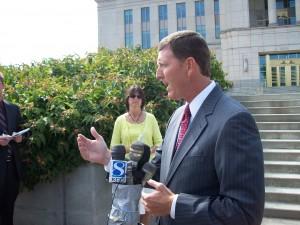 File photo of Bob Vander Plaats outside of Iowa Judicial Building as wife, Darla, looks on

The man who led the campaign to oust three of Iowa Supreme Court justices in this year’s retention election is hinting the Democratic leader in the Iowa Senate may be targeted in 2012.

Senator Mike Gronstal, a Democrat from Council Bluffs, said last month he intends to seek reelection in 2012.  Bob Vander Plaats, the president and C.E.O. of The FAMiLY Leader, says Gronstal’s politically vulnerable because Gronstal promises to continue blocking a proposed amendment to the Iowa Constitution which would ban gay marriage.

“The people of Iowa are quite frankly tired of groveling to Gronstal and I think there’s going to be a lot of pressure put on his senate peers as well as people within his district, that they want leadership there as well,” Vander Plaats says.

“And if Gronstal decides that this is all it’s going to be is a debate club — let the House pass stuff and we’re just going to tank it in the senate — I think there’s going to be a due date on that as well, on that leadership.”

Republican leaders in the Iowa House predict the House will pass a resolution which calls for a statewide vote on a constitutional amendment banning gay marriage in Iowa. Vander Plaats predicts Gronstal’s leadership post may be at stake if Gronstal blocks a state Senate vote on that proposal in 2011.

“There’s a lot of his senate peers who are not all that with him right now,” Vander Plaats says. “I think there’s many that are willing to flank off.”

Vander Plaats won’t name names, but he says some Democrats in the Iowa Senate are “reading the tea leaves” and may publicly call for Gronstal to reverse his vow to block the constitutional amendment on gay marriage.

Democrats will hold 26 and Republicans have 24 of the seats in the Iowa Senate in January, giving Democrats control of the debate agenda. Senate Democrats met in November and reelected Gronstal as their leader. In a written statement issued earlier this month, Gronstal called upon Iowans to convince Republicans that the 2011 legislature’s top priority should be “jobs, jobs, jobs.”

This is how Gronstal put it during a recent appearance on Iowa Public Television:  “I’m a lot more interested at this moment in time in putting Iowans back to work,” Gronstal said. “…The best politics for all of us is to put Iowans back to work. That’s got to be our focus.”