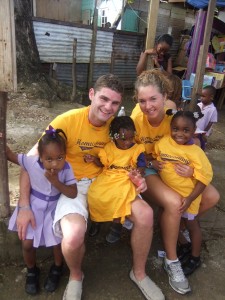 Riesberg and Smith with school kids in Jamaica

Two University of Northern Iowa students took time out of a recent vacation to Jamaica to deliver school supplies and T-shirts to students who attend a school with dirt floors and no running water.

Zach Riesberg from Carroll and Stephanie Smith from Emmetsburg were among a small group of college students rewarded with the trip to Jamaica by the Southwestern Company. Riesberg and Smith interned at Southwestern last summer.

Smith says she was a bit shocked by the conditions at the New Vision School – located in Runaway Bay, Jamaica. “It was kind of depressing, but at the same time it was uplifting to see how they managed to get by with what they had,” Smith said. “It was pretty much a shack…and to get to it, we weren’t even on a real road.”

Riesberg expected the condition of school would make for a somber atmosphere inside. “But it was the total opposite,” Riesberg said. “The kids and the teachers couldn’t have been more happy for us to be there. It’s the simple things in life that make them happy, so that was cool to see.” Smith and Riesberg are members of U.N.I.’s chapter of Pi Sigma Epsilon (PSE), a student organization within the College of Business Administration.

They gave the Jamaican school children U.N.I. T-shirts that were left over from homecoming sales. Smith and Riesberg also spent time playing the children and both say the pre-Thanksgiving trip has inspired them to do more charitable work in the future. “In fact, next semester, I’ll be traveling to Africa for a class…and I plan to do the same thing over there with all of our extra T-shirts from the spring,” Riesberg said.

Riesberg, 21, is a junior at U.N.I. majoring in marketing. Smith, 22, is a senior communication/public relations major.