You are here: Home / Crime / Courts / DMACC to offer courses in homeland security for TSA officers, others 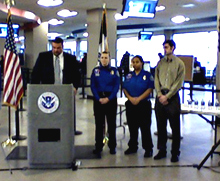 Des Moinea Area Community College (DMACC) is adding a program to train the T.S.A. officers that work airports and other homeland security officials to its crimminal justice program.

They are: introduction to homeland security, intelligence analysis and security management, and transportation and border security.

Jay Brainard, the director of the T.S.A. in Des Moines, says D-MACC was asked to start the program after a pilot project. He says there are currently classes in 22 other states in conjunction with community colleges, with more than 1,500 officers enrolled.

Brainerd says the courses will provide more tool to help officers improve their customer service and strengthen the workforce by providing them new skills and information. He says it will also be a jump start to those who want to pursue a degree in higher learning. Brainerd says homeland security is one of the fastest growing majors today, and this training will help T.S.A. officers excel in the field.

Retired F.B.I. agent, Mike Wyatt, is one of the instructors for the new program. Wyatt says the is a big need for people in the field beyond the T.S.A. Wyatt says the Department of Defense says there will be thousands of people employed in the next ten years in homeland security, as all the people charged with protecting our borders and our country will need the professionals who take the courses.

DMACC already has three other criminal justice majors which are law enforcement, electronic crime prevention and corrections. The first homeland security courses begin Monday. You can find out more about the new homeland security major at: www.dmacc.edu.